On March 21, 2016 the United States Supreme Court issued a per curiam (“by the Court”) opinion, without full written or oral arguments, in Caetano v. Massachusetts vacating a decision by the Supreme Court of Massachusetts that upheld the conviction of Jaime Caetano for possession of a stun gun. Ms. Caetano had possessed the stun gun in order protect herself from an abusive boyfriend. The Massachusetts Supreme Court concluded that the law prohibiting the possession of a stun gun was valid because stun guns are not the type of weapon “contemplated by Congress in 1789 as being protected by the Second Amendment” and therefore are not protected by the Second Amendment. 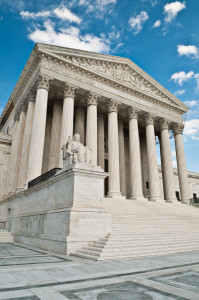 In its brief opinion, the Supreme Court concluded that the Massachusetts court misapplied District of Columbia v. Heller and McDonald v. Chicago in upholding the law. The Court stated that Heller does not limit Second Amendment protections to weapons available in the 18th century and instead applies “to all instruments that constitute bearable arms, even those that were not in existence at the time of the founding.” In light of this misapplication of Supreme Court precedent, the Court remanded the case to Massachusetts “for further proceedings not inconsistent with this opinion.”

Justice Alito, joined by Justice Thomas, concurred separately and criticized the Court’s opinion for its limited scope. The concurring Justices would have presumably invalidated the statute on the basis that the statute poses a complete prohibition on a weapon that is “commonly possessed by law-abiding citizens for lawful purposes today.” The two concurring Justices noted that hundreds and thousands of Tasers and stun guns have been sold and therefore are not “dangerous and unusual” weapons such that they are not afforded Second Amendment protection. There was no dissenting opinion.

The case is notable in that it is the first time that a majority of the Court has addressed the Second Amendment since McDonald, and is further significant because the opinion was issued after the death of Justice Scalia and thus at least one member of the liberal wing of the court joined the majority’s Second Amendment interpretation. A copy of the Court’s opinion can be found here.